Posts Tagged With: Dark Side of the Moon

Wish You Were There 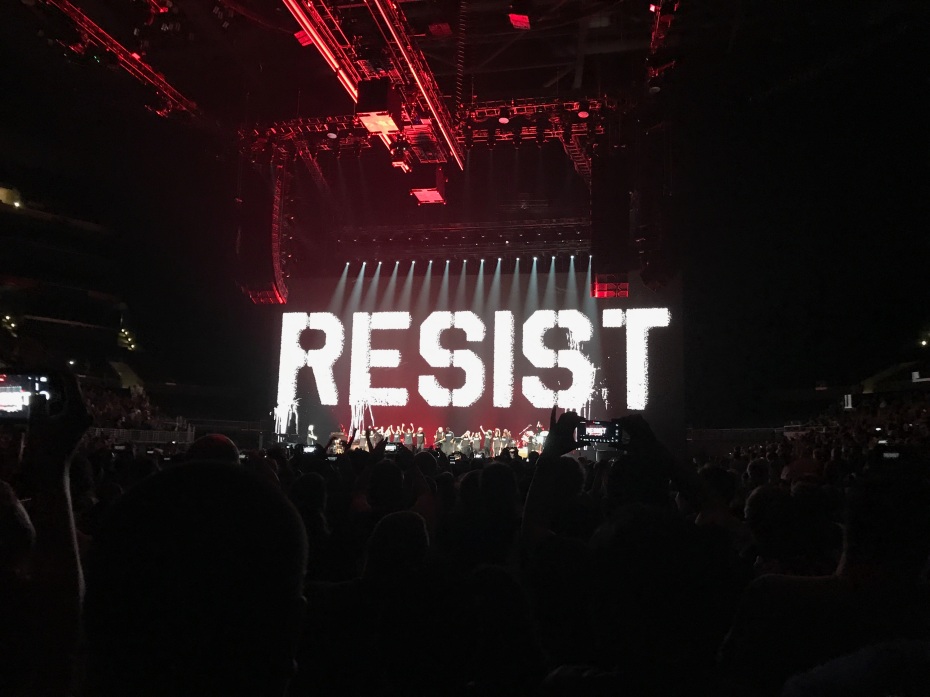 The Sixties Generation is not done yet.  Last summer we had a ‘local band done good’ playing live once again in Venice, and back in June Pink Floyd’s Roger Waters played Staples Center, DTLA (downtown Los Angeles). The Strawberry Alarm Clock’s concert in Venice, CA landed well with its classic sound and old hits.  Waters, though, revived the classics on a whole other level, expanded them with new material, and injected spectacular visuals that commented on today’s political takeover by the .01%.

Pig drones, curtain dropping screens, video perfectly synced to the lyrics, and a note perfect band all added up to more than a concert—an event. A mature artists’ statement of his past ideals which he still lives, meshing perfectly with current material and current events. He played his break-through work with Pink Floyd in the Seventies, enhanced and updated with new material that continues his themes of alienation, the ‘machine’, intoxication of materialism, and unity of life. I first saw Waters/ Pink Floyd at Pepperland in Marin County in 1970. Pink Floyd was totally unknown to us and performed in an environment made to look like the Beatles ‘Yellow Submarine.’  On this tour Waters exceeded that decades old exploration of the edge of reality and society. Unique among old rockers, Waters insists on pushing his own boundaries while at the same time honoring his more than forty year-old material. It works because he explored timeless questions back then, and can now invigorate the old skin with film of the current political climate. Images of Black Lives Matter, Trump, starving kids, factories and much more highlight the old lyrics into the context of today.

The timelessness of such art was illustrated for me on the train to the arena. Being a native Angeleno, I’m wedded to my cars. I drive everywhere, but these days driving to DTLA is just untenable…can’t do it and maintain equanimity.  On the Expo, I bonded with a fellow-traveler, a Millennial age young man, who was also wearing a Pink Floyd T-shirt.  We traded notes on the appeal of the music, the application to today’s world, and appreciation of the depth that Waters brings to his art. Waiting on line to get into the packed room, I noted that the majority of attendees were NOT Boomers.  Many young twenty & thirty somethings filed in and stood-up for virtually the entire show. Waters is not an oldies act.

Near the end of the two-hour show, thousands of strips of paper printed with the single word—Resist—floated from the rafters. Where Waters stands is clear. But then second from the end, he closed with Us and Them from Darkside of the Moon. An inquiry to the positionality of people into tribalism, the song concludes we’re all just ordinary men–even as we resist regressive policies from Washington and fight for justice. Concluding the event with a rainbow laser light show that referenced the Darkside of the Moon album cover AND the current use of the rainbow as an LGBT symbol, Waters underlined the role of a true artist, to remember and to point the way forward.