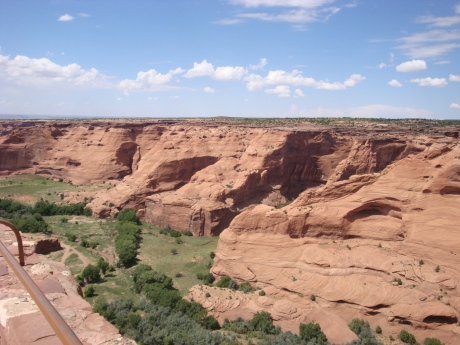 Coming out of the shade in Canyon de Chelly, NM, a Navajo woman surveyed her table of beaded jewelry and dream catchers. A sweet smile on a weather-beaten face lent veracity to her story of hiking down 600 feet into the canyon every day to sell her self-made curios. My usual practice is to avoid tourist site vendors, but the people at this park sell with such calm and reserve I didn’t restrain myself. Or was it simply the smoothing of my hard edges like the surrounding red rock canyon from years of traveling and encountering such sellers all over the world. Or maybe because it was 90 degrees and I am alone and lonely. So, I engaged the woman and bought a pair of dangling beaded earrings. Just because.

Jeweler hikes up and down canyon daily

She reported that the earrings are made by her 9 year old daughter, (always an enticement), while she hand-painted the kokopellis on sandstone and weaved the dream catchers. I used to think my job as a classroom teacher in the inner city of Los Angeles with its 80% poverty and 50% non-graduating of the students was a tough job. But traveling around I get a much wider perspective on the challenge of making a living. Right here in the USA. This woman carried the sweet and soft demeanor, while working and living in challenging conditions.

Canyon de Chelly lies off the main summer tourist route in the Southwest. Located about one hour from Interstate 40, the road meanders through the Navajo Reservation in northern Arizona and New Mexico. I broke my schedule to get to Santa Fe to take the long detour.  For miles around all the eye can see are scrub grazing land and distant mountains. It is so remote that in six hours on the rez, I saw several people with their thumbs out. No public transportation?  A sight never seen in California, even at the national parks. First I saw a couple of teen age girls walking resolutely toward the town of Ganados with pink hair and gothic black shirts and their thumbs out. I had driven a few miles before it registered that it would have been normal to pick them up out here. Not where I live.

The canyon itself stuns the eye with burnt brick red rock out-cropping and farm homesteads dotting the canyon floor. Being a desert rock and canyon lover, I stood on the edge in awe for an hour. Car loads of tourists came and went, from the young couple in a rental RV to a group of Japanese tourists each wearing a different hat and a sewed on black neck guard to protect from the sun. Then there were the native summer species of the national parks—over-weight, American families who stop for a few minutes, gaze at the scene, and then pile back into the air conditioned car til the next stop.

Munching on my healthy salad from Trader Joe’s and imbibing a shorty can of gin and tonic, the minor buzz inspired me to hike down the trail for a few minutes. Well, the few minutes turned into a 2.5 hour hike with 1200 vertical feet climb. Spectacular views of undulating rock formations, and dark rusty layers of sediment eroded into eerie shapes that could have come from a avant garde ceramicist’s wheel greeted me on the 1.5 mile each way walk. About a half hour down, I engaged a couple of park-uniformed young people on a look-and-see inspection of the trail. The young man exuded optimism and reported that he was a volunteer and had just been hired full time next month. He lived in the town next door to the park, Chinle, and didn’t want to leave home and so was happy to get the job. The teenage girl sported pink-dyed hair and had just graduated high school. She also offered a similar full-face smile that reminded me these weren’t the tough inner-city kids I used to deal with back in LA. We proceeded to share notes about the relative merits of different smart phones.

Before I knew it, I could see the famous White House ruins off in the distance and just had to continue to the end. Picking up the pace I got there just after the Japanese tourists, took a selfie and turned around to buy my official de Chelly earrings.

A man in front of the  white house

Huffing and puffing and almost running, I raced up the mountain, legs and back aching. I stopped only when two women hikers asked me if I was local. Smiling to myself and them (I figured it was my long, dark pony-tail disguise), I said no. I asked what they needed? One responded, “ Will it rain?”. I looked up at the gathering clouds and from somewhere inside summoned the confidence to say, “No, and even if it does it, it’s only a little.” Turns out I was right. Then I asked where they were from? The tall, skinny one with disjointed features and spiky dyed black hair said, “France.” The other of short stature and hair, looked surprised with my response. I said, “Look, I am from California and I know you French are tough.  You can do it.” Then I pointed to the ruins and said, “Go do it. You must.” And returned to my brisk pace up the mountain confident that I contributed to amiable French/ American relations.

It stretched my physical capabilities and my schedule, but I pushed on and made the top and crashed through my aging back issue to my car. I made it. Real travel means keep pushing on, keep going til you see what you didn’t expect to see. I’ve had that experience for forty years, and I wasn’t going to let my age stop me—yet. Yes, adjustments but not babying.

Canyon de Chelly offers a distinct view of how modern American indigenous people live around and in their ancestral setting. Driving along the rim of the canyon, every few miles is an compelling outlook to stop and take snaps. And at every stop are an Indian or two with a tarp and their array of sandstone paintings, earrings, and necklaces. Between each outlook one passes the homesteads with satellite antennas and a collection of old cars and pick ups. Strange mix of nature, tradition lifestyles, and 21st Century USA.

On the way to the next outlook, a fiftyish guy had his thumb out. Tall with missing teeth, jet black hair, and a scruffy beard and cowboy shirt, I decided to break my ennui and isolation and let him ride. In accord with one of the sadly too often true to stereotypes of Indians, he smelled of alcohol and spoke with a pronounced slur. Amiable but confused in his conversation he lived near the main road, but had to hitch because he had no gas for his pick-up truck. We bumped fists and he loped off into the scrub brush and I continued.

Slipped House outlook offered a gaggle of four locals sitting under the shade of a short tree and one of their number hanging at the stretched tarp with the usual paintings and beads. Walking by, she went into a long spiel at a very slow and low pitch. I wondered if it was my aged hearing or her. I nodded, she smiled and continued with her explanation of the esoteric meanings of her sandstone painting. I understood the words red, blue, and green but nothing else. Entranced by her sweet, low-key style, I had to buy. She asked 10, I said 7. Tapping into my decades of haggling with vendors from Zimbabwe to Austria, I expected her to come back with 8, which she did. Just for the fun of it, I said no, but she surprised me with yes and a smile.

hanging with the teens at the  canyon

I’ve traveled the southwest almost yearly for decades and I had never made to the famous site of Canyon de Chelly. But what pushed me to get off the Interstate, and delay my arrival at my close friends in Santa Fe was a sign, an omen that started at home. I chanced upon my brother-in-law outside the gym at home, and he had just made a trip to the same area and the ONLY place he mentioned was Canyon de Chelly. So, the night before at a motel in Flagstaff, I looked at a map, yes a real paper map, and de Chelly on the map and decided it was time. I called my friends in Santa Fe and said I’d be a couple hours late and took the 1.5 hour detour to Navajo nation and the canyon.

That side trip felt like what I was, a visit to another nation. The Navajo live in a unique amalgam of modern America and their traditional farming and grazing culture. I encountered a special flavor of America; indigenous people living on their ancestral lands who totally integrated with the modern world. This is always my quest when I travel. Uncover the unexpected and encounter the local people. Meeting Navajos on this trip showed me how it is possible to balance one’s history and traditions and still be fully invested in modern culture.

I never know what may happen while living the dream deferred, the free life, the expressive life, the life of adventure, so I make my plans in pencil and invite surprises, Canyon de Chelly was a sweet, physical, and memorable one.