panorama of the dark side of Haleakala near Kaupo

With the sounds of Pink Floyd’s Dark side of the Moon pulsing in my head, I woke up in my tourist condo in Kihei, Maui and shouted out ‘Enough of canned activities from the vendor on the beach. Today is adventure day and I’m going to find it.’  After two relaxing and beatific weeks of hot tubs, drinks with mini-umbrellas, and surfing with the ho-dad (beginner surfer) hordes.  I had to bust out.  I filled up the tank of my rental car at Costco and headed up-country.

Forty-five years of travel vacations gives me some perspective on what I like or not.  I’ve dabbled in various forms in my terminally peripatetic life.  Mostly I prefer new locations that offer some special passion such as last year’s trip to southern Africa where I tapped into my passion for deserts (red dunes of the Namibian desert) and waterfalls (Victoria Falls).  At times I just want to go to tropical islands and relax, ride the waves, drink Mai Tais and chill.  But even a chill out in a very ordinary and predictable place like Maui offers up some edgy adventures in between the surfing, scuba diving, and the, yep, Mai Tais. 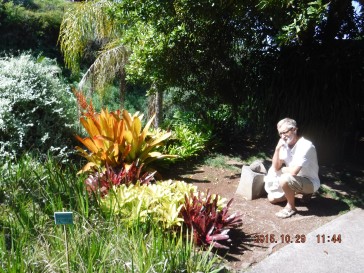 That day I stretched out of the Maui beach routine.  Getting an early start with my old college buddy, C-Dog, we decided to explore the dark side of Haleakala volcano (dark in the sense that it is much less trampled by the tourist hordes, or so I thought).  We headed up-country (meaning higher elevation on Maui) initially checking out the privately owned Kula Botanical Gardens.  Botanical gardens rank right up there with my passions for hot springs, waterfalls, caves, and deserts.  Kula didn’t disappoint.  Family developed in the seventies, the gardens offer a wide range of plants from all over the world that are commonly grown in Hawaii.  I was surprised that the country of origin is most often South Africa.  When I reported this to a South African friend, he confirmed that most people think plumeria and others are Hawaiian native plants.  Now I understood the acclaimed of the Kirstenbosch National Gardens in Cape Town which I visited in 2014.  Although, a small, 8 acre, property , with a wide mix of plants and the 180 degree view of the island, Kula Gardens qualified this side stop as an adventure. 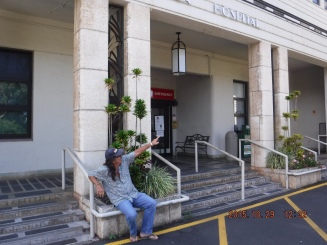 Prompted by my buddy’s desire to revisit where he had done some medical training back in the 80s, we found another of Maui’s rare gems:  Kula Hospital.  Originally, built in the 1920s as TB sanatorium, it is now a general hospital for the island.  Classic art-deco architecture and original landscaping and old houses gave the impression of old Hawaii.  Except for the modern cars in the parking lot, it could have been 1945. 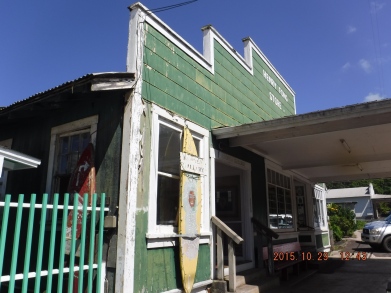 While getting gas, next to one of Maui’s original coffee houses (Grandma’s) I peeped into an art gallery located in an ancient 1920s building.  But not a typical dolphins on a wave type pervades tourist strips in Kihei or Lahaina, it houses the artist’s studio, his gallery, and his stream of consciousness self-promotion.

Finally, we rolled to Ulupalakua Ranch where a seniors’ motorcycle club had gathered for lunch, next door to MauiWines’ tasting room.  After a couple sips of expensive and too sweet pineapple wine, we headed into the reportedly treacherous road on the leeward side of the mountain.  For the daring (according to the hyper-cautious car rental maps) motorist, it is an alternative route to the famous rain forest haven of Hana. 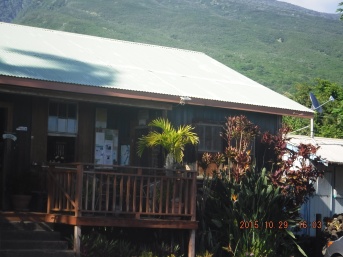 Although I’ve been to Maui at least 8 times over the decades, I’d never been to the backside of Haleakala.  Tourist maps make it sound problematic with a long stretch of unpaved, one-lane road.  But instead of drama we were rewarded with big vistas of undeveloped grasslands and lava rocks.  Like a prairie on the moon.  Every so often a ramshackle, half-built house with a satellite antenna popped out of the brush.  I later found out that a lot of the area is Hawaiian Homestead land, where native Hawaiians can live for free.  Out there it felt as distant from civilization as the Navajo Reservation is from Flagstaff, AZ.

Arriving at the end of the paved road at Kaupo, we found the coolest general store on the island.  More than a store with cold beer and drinks, it offers home-made jewelry, and a museum of old stuff like cameras and hair dryers.  Weird but real, and definitely not Lahaina.

While sipping a cold brew on the lanai of the Kaupo store I felt adventurous and satisfied, until van after van of Friendly Isle tour buses rolled by in their packaged tours.  Oh well, I had enjoyed my fantasy escape to the edge of Maui.  Meanwhile, I had to negotiate the one-lane road back to tourist central in Kihei.  Just  another day in tourist paradise, adventure style.  As always, the living the dream means seeking and SEEING the adventures right in front of you.