On my recent trip to Maui, driven by curiosity and desire for the authentic,  I explored many nooks and crannies on Maui from Makawao to Paia to Lahaina.  Nowhere could I get a hit of the real and soulful with local vibe and original spirit.  Until I spent a day in Wailuku.  Wailuku is the original town and administrative headquarters on that side of the island and has minimal visitors.  The first time I really visited Wailuku was in 2008, when a friend from college relocated here from Pismo Beach.  I had been coming to Maui for decades, but my previous experiences on Maui, mostly at the nature sites (Haleakala, Hana, Kihei, Little Beach, and Lahaina) had nothing to do with Wailuku.  I stayed at his apartment overlooking the town and discovered it was a normal town with neighborhoods and kids and like my hometown Santa Monica used to be back in the seventies.—an ignored and decrepit historic core (modern euphemism for old part of town).  But now gentrification has hit old Wailuku.

Gentrification often saves the downtown core of old cities from demolition, including in paradise.  After a four year absence from Maui, I spent a few weeks on island and to my chagrin the beach tourist towns have blown up, just like my home beach town.  As in too much traffic, jaded merchants, and ersatz culture.  But in Wailuku redemption has come.  In 2011 I noticed the seeds had been planted, but now they have sprouted.  The coffee place, the restored movie theatre, the record store, and other shops bustle on Market.  The next street over Central Ave is primping for redevelopment, with  signs announcing restoration of old buildings from the forties.

From street people  to stockbrokers, everybody stops at Wailuku Coffee

After several days watching the long lines of rental cars cruising through the tourist strips of Paia, Kihei, and Lahaina, I craved a hit of  the down home and local.  Wailuku called. On my last trip, I spent a whole days at Wailuku Coffee Company and few people would come in.  This year, I sat there for a couple hours and observed a constant stream of customers.  In just two visits, I was able to identify regulars.  I observed several business meetings, mothers with  their kids, and even the local eccentrics. 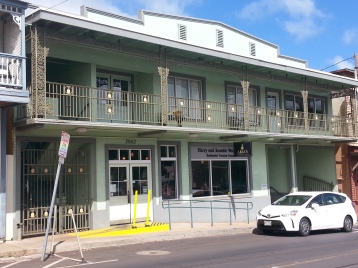 chic restaurant next door to hostel in the core

Inspired, I took a walking tour of downtown Wailuku, and discovered a wide-range of new shops catering to various hip or up-scale clientele.  A converted gas station now operates as a metaphysical gem store, whose ethnically mixed, young clerk wore a huge mumu, assisted a young Hawaiian guy buying crystals, while a 80-something white woman in an aloha dress waited.  Across the street an art deco style building housed an attorney, a yoga studio, and a holistic healer.  Rounding the corner, next to a huge parking lot for the municipal bldg. the hostel had a few youthful travelers lounging around. On one side of the hostel a totally vegan store celebrated its health orientation and on the other an upscale, table-cloth restaurant served lunch.  At the prime intersection, Market & Vinyard, a vacant store announced the pending opening of Pono with no clue on its mission.  Across from that corner the venerable Kokopele grill stand with its big yard used for weekly outdoor reggae movies.  In typical island style the stand occupied only one tenth of the lot.

A variety of other health-oriented shops have popped up next to the mysterious Pono.  They boasted a sign indicating no smoking of either kind—tobacco or e-cig.   Walking a couple more blocks down Market, I saw a man about 40 sitting on the sidewalk surrounded by debris of old pineapples.  Wary of being accosted for funds from my years of travel I braced myself, but he simply smiled and said “Hi.”  Even an empty lot had the makings of a re-do with a brand new concrete archway in the Japanese style opening to a barren lot except for a few cement pilings and trash.

Built 1933 and posters from  this year, Iao Theatre

As in many historic cores with classic theaters, the Iao Theater from the thirties (official historic landmark) had flyers of past and upcoming concerts from Margaret Cho to the Maui Chamber Orchestra.  Like the enigmatic Bowling Center which is only open for two mornings per week, nothing surprised me in reviving Wailuku.  Across from the heartbeat of Wailuku Coffee Company is Maui Shoe Academy, which deals in shoe repair and specialty footwear.

Further down Market I noted two more hostels, old and basic,  that could’ve been here since 1976, my first visit, but weren’t.  These days globe-trekking young people have a place to land and forage around the magical isle of Maui.  One, The Banana Hostel had a sign that announced that smokers had to stand away from the entrance.  It must be for foreigners, I can’t imagine Americans needing that instruction.

The Wailuku merchants seem to be serious about their revival with a guy sweeping in front of shops on Saturday with a broom and bucket.  Along with the industrious street sweeper, a wacky ‘hapa’ (ethnically mixed) guy lingered around the café for the couple hours I was there.  He flitted from store to café to another store and somehow finally got a couple dollars and waved them around and bought a coffee and salad and asked to sit at my table.  I said, “Sure.”  He then said, “Do you mind if I talk to myself?”  I responded, “No problem.”  He apparently didn’t like that response and promptly left. So, check-check for Wailuku’s harmless, aloha-spirited street guys.

Discovering the ‘new’ Wailuku, confirmed for me the value of keeping an open and curious mind-set while traveling as a counter-balance against the ‘been there, done that’ attitude that can surface later in life.  Even going to super touristy Maui for the umteenth time gave me some  discovery time.   Coming up on LDD:   Adventures in wild cowboy country on  the backside of the volcano.